Islamic Gardens ... one foot in the garden, the other in Paradise

Think of Islamic gardens as heavenly teasers!  The garden is a  tiny, luscious sample of what Paradise has on offer after our stint on earth is complete.

Green space has always been considered sacred in Islam, and it was even to pre-Islamic Arabs.  In a sizzling hot environment with scarce water resources, it's easy to understand why a garden is a celebrated sanctuary.  Inside the walls there's escape from the harsh environment outside, a place to withdraw and replenish body and soul.

Islamic Gardens Near and Far 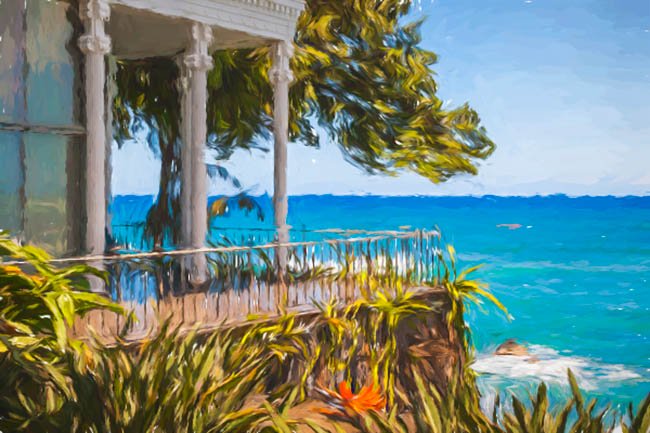 Doris Duke's stunning home and gardens, Shangri-La, Honolulu. A 60 year endeavor with 2600 pieces of Islamic art. The porch and ocean from the garden.

Any history-loving photographer would jump at the opportunity to visit an Islamic garden. I'm sure you would.

Once you see pictures in your imagination, then get out your camera.

Islamic traditional garden environments are a totally different experience than European gardens. Look for an opportunity to visit one. Think about them in the context of a hot and dry desert environment. You won't come across any perennial borders. The beauty resides in other elements like water, culturally relevant architecture and desert-loving plants like the palms.

They make fascinating reading.  Search out some books on Amazon and learn more about them.

The Element of Water

“Gardens underneath which rivers flow” conjures up a picture of water bubbling and gurgling through the garden and under paths... but it also has a symbolic meaning. The water serves two purposes. Not only to replenish the flowers, it nourishes and renews the soul. 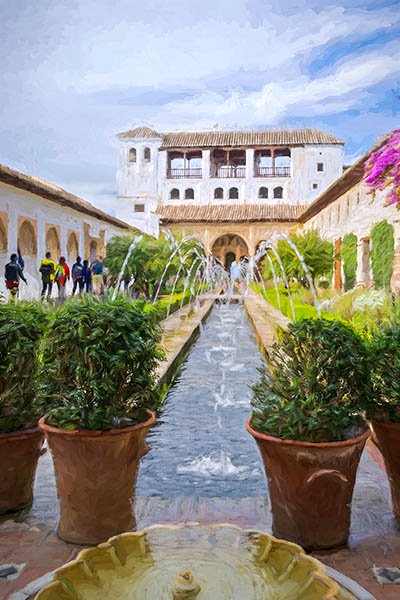 Gardens Generalife in AlHambra, Grenada is the perfect traditional Islamic garden. It has an abundance of water to elevate the soul.

It’s common to have a water feature in the centre, so it's an easy job photographing symmetry, reflections, water features... all within a quiet, harmonious space.  An ideal garden for practicing photographic composition rules!

Marc Bryant, a researcher from the UK, claims the Qur’an makes 166 references to gardens.  What initially comes to mind is the desert oases with towering palm trees and the obligatory Bedouin camels on their knees slurping and sucking up cool water.

That's a refreshing, peaceful scene... Eden in the middle of the scorching desert sand.

I lived in the Middle East for 8 years and I can vouch for the love Muslims hold in their hearts for gardens.  Not just for the garden itself, garden images appear in the magnificent hand-crafted carpets which are an absolute must to acquire if you travel through the Middle East. I have a few… collecting gets to be an addiction! Look carefully at the intricate designs and you’ll find your garden.

Gardens are also a significant theme in Islamic poetry and literature. Also ceramics. Turkey has the most beautiful ceramic tiles that are often decorated with plants  … tourists love to pick up a few for decoration or as trivets on the dining table.

I’m not an authority on Islamic traditional gardens,  but I’ve spent many peaceful, pleasant hours within courtyards, some were modest but others were ostentatiously grand.  I don’t care if the garden is traditional or only mimics some of the traditional concepts.  It’s the connection to water and other earthy elements that I love to experience and appreciate. And then translating this experience through my camera lens. 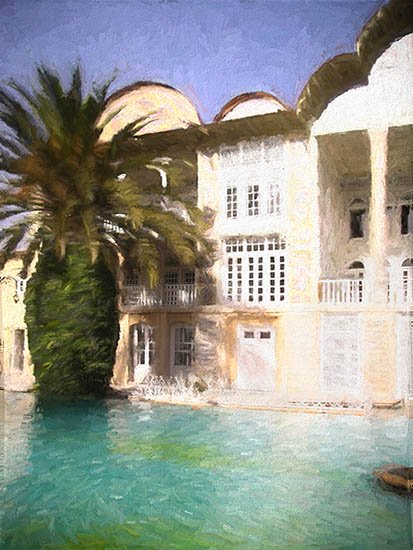 In Saudi Arabia, the homes and gardens are surrounded with high, solid walls. From what I understand, the Persian gardens weren't walled, but once the Arabs invaded in the 7th Century, they constructed walls so the gardens were a private and peaceful slice of paradise.

Attributes for Generalife and Eram garden photos (edited by me in Topaz Impression):

The more you know about what you’re photographing, the easier it is to get the feel of the space and tell the garden’s story in pictures.

In the 8 years I spent in the Middle East, some of my dearest memories are times I spent kicking back in courtyards with my new friends and neighbors.  For a year I had 3 of my Siberian Huskies with me and they were a big hit with the local families. We had far more invitations than we were able to accept.

Outside, it was challenging for women in Saudi Arabia but the minute I entered the courtyard and the big, solid gate swung shut, my stress melted. It was kick-back, relax, a little socializing. .. and lots of spicy Saudi tea. Here's the recipe. Simple and so refreshing.

Put on the tea and I'll see you in one of my Islamic gardens.  Start with Doris Duke's Shangri-La in Honolulu.

If you liked this page, you'll also like these...