You'll want to visit Hatley Castle and gardens for the awesome photo opportunities but...

...  if you're like me, it'll only take a couple of hair-raising ghostly stories to make you put down your camera for a bit and listen. 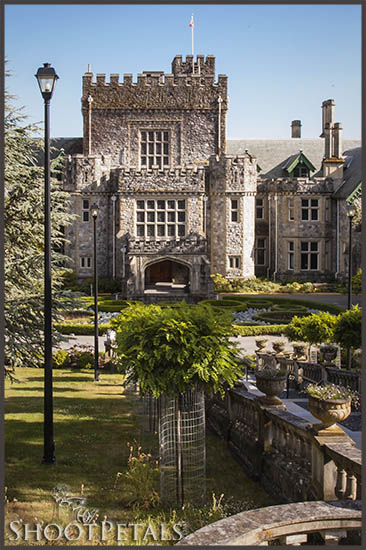 A goldmine of vertical, horizontal and diagonal lines in the castle and the formal garden in front.

"Money doesn't matter. Just build what I want!" And they did!

Not just a 40 room, Tudor style mansion, but 565 acres of formal gardens, forest and farm land. There were 100 groundskeepers and gardeners tending to the estate while the Dunsmuir family lived in the mansion (1908 until 1937).

Once upon a time, white orchids from India  filled the conservatory, exactly the place a gigantic banana tree pushed its way up to the sunshine in the central dome.

In 1940, the property was purchased by the Canadian Government as a Naval Training Academy. It went through several changes over the years as a military training establishment.  Finally, in June 1995, the province of BC leased the land from the Federal Government and transformed the military college into the public Royal Roads University.

Also in 1995, it became a National Historic Site, which is why all of us get to enjoy this spectacular property! We're so lucky.

The day I shot these photos, it was much too sunny and bright... you take what you can get!  I used some photo editing treatments in an attempt to reduce some of the contrast. I'll go back another day with some cloud cover.

I'm looking forward to doing it all again!

Such a romantic part of the castle gardens... this window in the Italian Garden has the air of Europe.  The birds were singing their little hearts out just outside the open window. 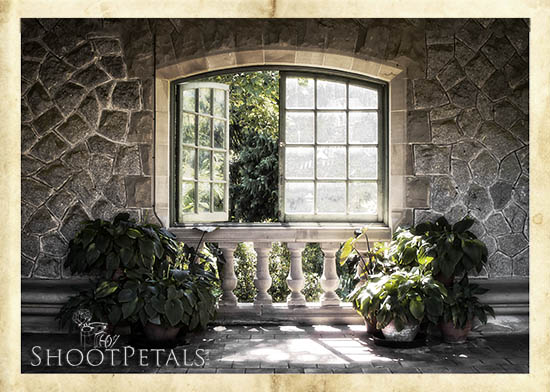 Italian Garden at Hatley Mansion with sun streaming through the window. Such gorgeous texture and patterns everywhere.

The stonework in the wall has loads of detail and I can feel the warm sun streaming through the window. A super space for wedding photographs!

Caio to the Italian Garden... we're on the move.

Lakes, Streams and a Water Wheel
...patterns and textures and relaxing sounds of water

There are water bodies aplenty here on the property. The lake in the Japanese Garden and a babbling brook or two.

There are oodles of haunted tales here at the Hatley Mansion  and a favorite of mine is about young James, the son. He was killed in WW1 aboard the Lusitania when it was torpedoed by a German sub. Which is somewhat ironic since

Just think, you could be lucky enough to see him rising from the lake in the Japanese Garden or wandering around the shore  His sister claims she saw him on the pathway, right here, while she was standing across the lake, in the gazebo. I took lots of photos of the bridge and the area but... 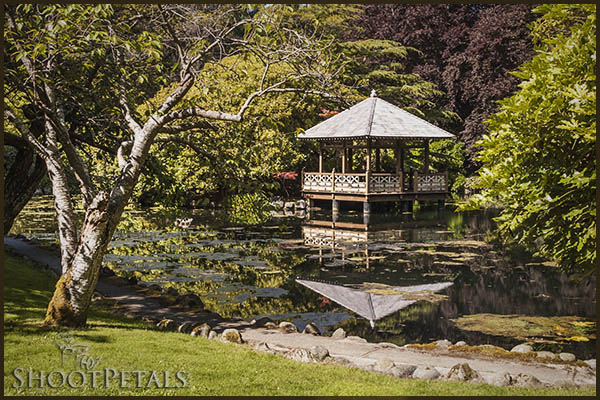 The gazebo in the Japanese Garden pond at Hatley Castle is reflected in the water - edited in On1 with HDR preset. But no sign of young James!

The Japanese Garden covers a large area with very different 'sub gardens' and a variety of photo scenarios. Look for wooden bridges... snow and pedestal lanterns and the pavilion on the lake at Hatley Castle.

The Italian Garden In Soft Pink
... notice the 'framing' in these two images

The formal Italian Garden is to the right at the back of the castle.  To soften the contrast and add an antique style to the photos, these two images are dipped in a soft pinkish brown tone.

The structure in these two pictures is a very important part of the story. I wanted to let everyone see the environment of this romantic Italian Garden at Hatley Castle.

It's not  just about the flowers... it's a story about the whole environment and the 'frame' is a co-star in this scene.

Photographers Flip Over This Castle
... Hollywood Swoons Over It, Too.

This is the scene as you walk towards the front of the castle from Royal Roads College.

A very formal garden and stone planters skirting both sides of a sloping walkway. It's all just too overwhelming when you have a camera in your hands!

If you have time, do a walk-about first and take it all in. Decide what scenes you'd like to shoot, write them down in a notebook, Depending on how much time you have, go back over the areas you want to photograph and concentrate on a few really great images.

Just how many TV shows and movies were shot here?

So, it's not just a serious photography destination... Hollywood's shot more than 33 major movies in the mansion and gardens in the last 75 years.

I did get some photos in the Formal Rose Garden but most of the blooms were finished by the time I arrived. They looked pretty darned tired!

I think May and June would be absolutely spectacular and I'm going to follow up on that this spring.

I'm planning another visit early this spring and I'm hyped about it.

And this one's for late this month... May, or early June. That rose garden should be absolutely fabulous! I'll come back here and update you. 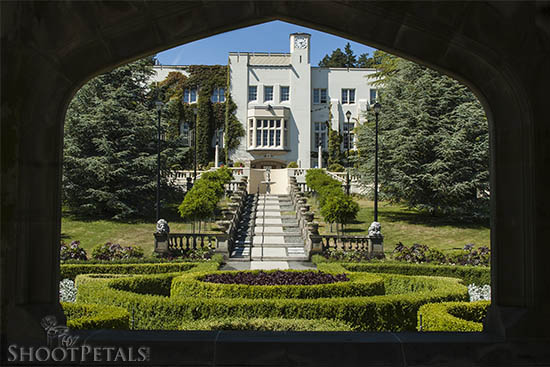 The front door at Hatley Castle, looking at the College bulding and formal garden.

Hatley Castle and gardens has to be close to the top of your travel photography wish list.  It's worth a full day for the pictures and an add-on tour of the castle, museum and gift shop.

Make your plans by visiting either the Hatley Castle or the Royal Roads College websites.  You might want to phone and make sure there isn't a special event, like a wedding, that might put limits on where you can go in the gardens.

I've been disappointed a few times in different gardens when there were weddings or they were shooting a movie. Always a good idea to check it out ahead of time.

Ciao for now... until after my late spring visit.

Please leave a comment below on what you've learned or any topic you want to know about.  And if you enjoyed this page, it would be super if you'd "like" it.

All this helps me know how to create even more great content for you.